This sporadic award is presented to residents and businesses who’ve made exceptional efforts to beautify and improve their properties.

This page features just a few of the dozens of homes and businesses that have been recognized since the program began more than 12 years ago. 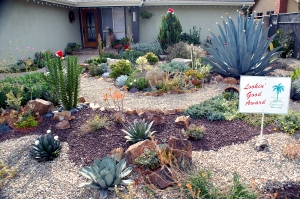 Read about it in the
Coastal View News and see the
step by step process on
Deana’s blog.

Here are some of our previous winners 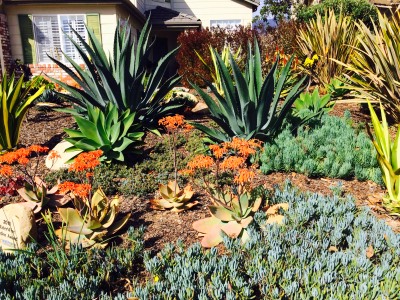 Bright colors and unique plant shapes initially drew the attention of Carpinteria Beautiful board members to the front yard of Jon and Susan Everett’s home on Pacific Village Drive.

The water wise nature of the landscaping then tipped the scales in favor of the Everett’s selection as recipients of Carpinteria Beautiful’s Lookin Good Award.

In the fall of 2011, the Everett’s, along with Greenleaf Landscapes, designed this xeriscape, drip irrigated, water wise front yard. Seven species of drought tolerant plants were installed within the main area: agave, aloe, aeonium, esheveria, kalanchoe, furcraea, and senecio.

Five large sandstone boulders are surrounded by agave, aeonium, and furcraea. Instead of a water feature, a short-leaf senecio mimics a stream flowing across the yard into the long-leaf senecio “pond.” The entire transformation took about two weeks.

Rick & Christie Joy reduce their lawn and replace it with drought-tolerant landscaping at 5588 Calle Arena.

The Joy’s have owned their Concha Loma home for years but in 2008 they decided to reduce their front lawn to a small area close to the street and erect a wall to create a courtyard. Tim Doles from Doles Landscape incorporated ideas from photos that the Joys had collected over the years.

The Joys transplanted many of their container succulents into the garden, which now requires very little watering. Drought tolerant succulents such as aloes have been placed around groupings of rock, and the garden includes a dragon and olive tree, octopus agave and ceanothis.

Jim & Betty Stein’s renovations result in a stunning home and garden at the corner of Linden Avenue and Dorrance Way.

The building has quite a history. When the Stein’s first bought it back in 1974 it was known locally as “The Alamo.” Before that it was “The Near Beach Hotel.” Throughout 1992, the Stein’s son, an excellent contractor, gutted and rebuilt most of the house. The vintage Catalina Tiles adorning the walls are greatly admired by passers-by. The tile mural of the sailing ship next to the front door was designed and created by another son, Tom. The front garden features King palms, bougainvilleas, Snowflake roses, hibiscus, Clivias, Silver Creepers, a wide variety of succulents and the extensive Eugenia hedge, which shields their “Secret Garden.”

Barry & Pam Enticknap create a beautiful color palette with their Victorian-era home and garden on the corner of Seventh and Walnut. 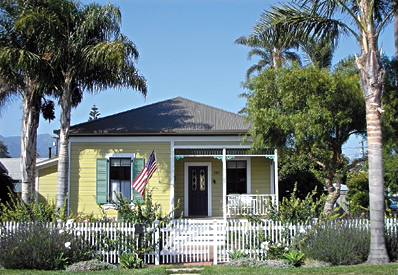 The Enticknap’s gradual restoration included keeping the original Douglas Fir plank floors and the black and white linoleum in the kitchen but replacing the tin roof and worn out rails in front and back with replicas based on the original design and custom built by local cabinet maker and woodworker Dave Dahlquist.

Landscape architect Pat Brody’s drought-tolerant, low-maintenance garden design attracts birds with its lush color choices that complement the custom colors of the late 1880’s home. The front garden contains alstromeria, salvia, ornamental grasses, lavender and white roses. The house was painted in its original color: mustard. The accent colors reflect Pam Enticknap’s artistic talents. The trim is a dark green; porch ceilings are robin’s egg blue (a common Victoria-era choice); the gingerbread was painted with a 50-50 mix of the dark green and mustard producing almost aqua; and finally, the doors were done in mulberry.